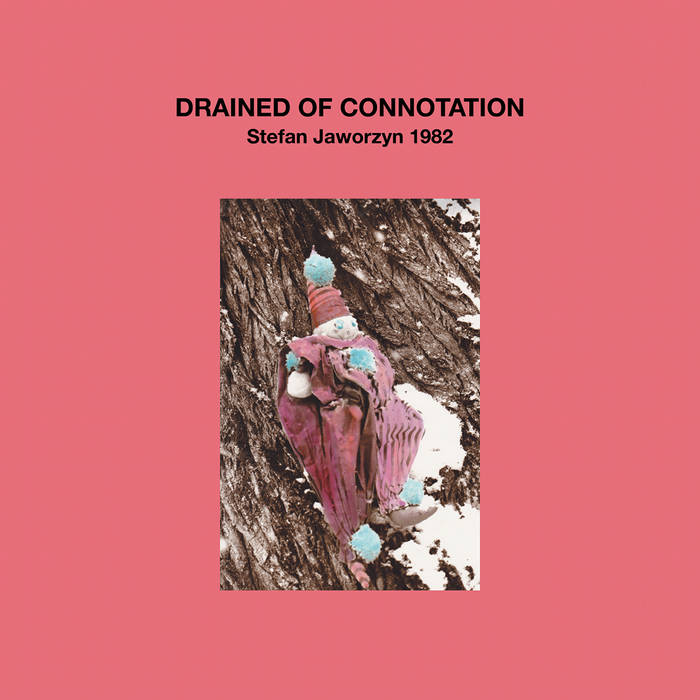 Drained Of Connotation is a collection of synth improvisations recorded by Stefan Jaworzyn in 1982, recently rediscovered by the artist when trawling his cassette archive for the 2013 Skullflower KINO reissue/compilation series.

Writer, musician and misanthrope Jaworzyn was a notorious and energetic presence in the UK underground of the 1980s and ’90s. Following a brief stint in Whitehouse, in ’86 he formed Skullflower with Matthew Bower and remained the band’s guitarist for four years, playing on Birthdeath (1988), Form Destroyer (1989) and Xaman (1990), among others. In 1990 he established the Shock label, which, like the annual Shock Around The Clock film festival, grew out of Shock Xpress – the seminal, vigorously outspoken horror/exploitation zine edited by Jaworzyn for most of its lifespan. Shock Records was a resounding boot to the arse of the narrow-minded, welcoming artists as disparate as Lol Coxhill, Coil, Drunks With Guns, The Dead C and Ramleh into its fold.

Jaworzyn rejoined Whitehouse in 1990-91, and around this time was also invited to participate in a roundtable discussion about serial killers on Channel 4’s After Dark programme – it ended with him vehemently debating the meaning of the word “integrity” with fellow guest Michael Winner. Despite having supposedly renounced the guitar, in ’91 Jaworzyn returned to the instrument with some venom, forming Ascension (later Descension) with drummer Tony Irving; the band’s turbulent brand of free music – documented on several substantial CD and LP releases – famously incited an audience riot when they supported Sonic Youth at Kentish Town Forum in ’96. In the second half of the decade Jaworzyn retired the Shock label and largely withdrew from music, choosing to focus on drinking and cursing; although his The Texas Chain Saw Massacre Companion was published by Titan Books in 2003, and on occasion he emerged to play live (including the Whitehouse ‘farewell’ show in a duo with drummer Chris Corsano).

Now, after seventeen years off the grid, Jaworzyn has reappeared. 2013 saw him reactivate Shock to issue two 12” EPs of emphatic new solo material, as well as Eaten Away By Shadows (a compilation of solo bedroom recordings from ’82-’83) and the aforementioned Skullflower KINO CD series. Pre-dating the Eaten Away tracks, the driving, faintly sociopathic and supremely zoned pieces on Drained Of Connotation (BLACKEST027) were created in early/mid-’82 at Jaworzyn’s then home in Cardiff using a Korg MS10 or 20 (on loan from musical collaborator Robert Lawrence) and his beloved Dr Rhythm drum machine.

This release is being made available by Blackest Ever Black in a vinyl edition of 700 copies, mastered by Noel Summerville, and also in digital formats. The digital edition includes an additional ‘noise’ piece, ‘Why Must We Rot’, also recorded in Cardiff in early/mid-’82, this time using an EMS Synthi AKS loaned by Alex Binnie.

Recorded by Stefan Jaworzyn in 1982.

Cassette transfers by S.J. 2013.
Mastered and cut by Noel Summerville.